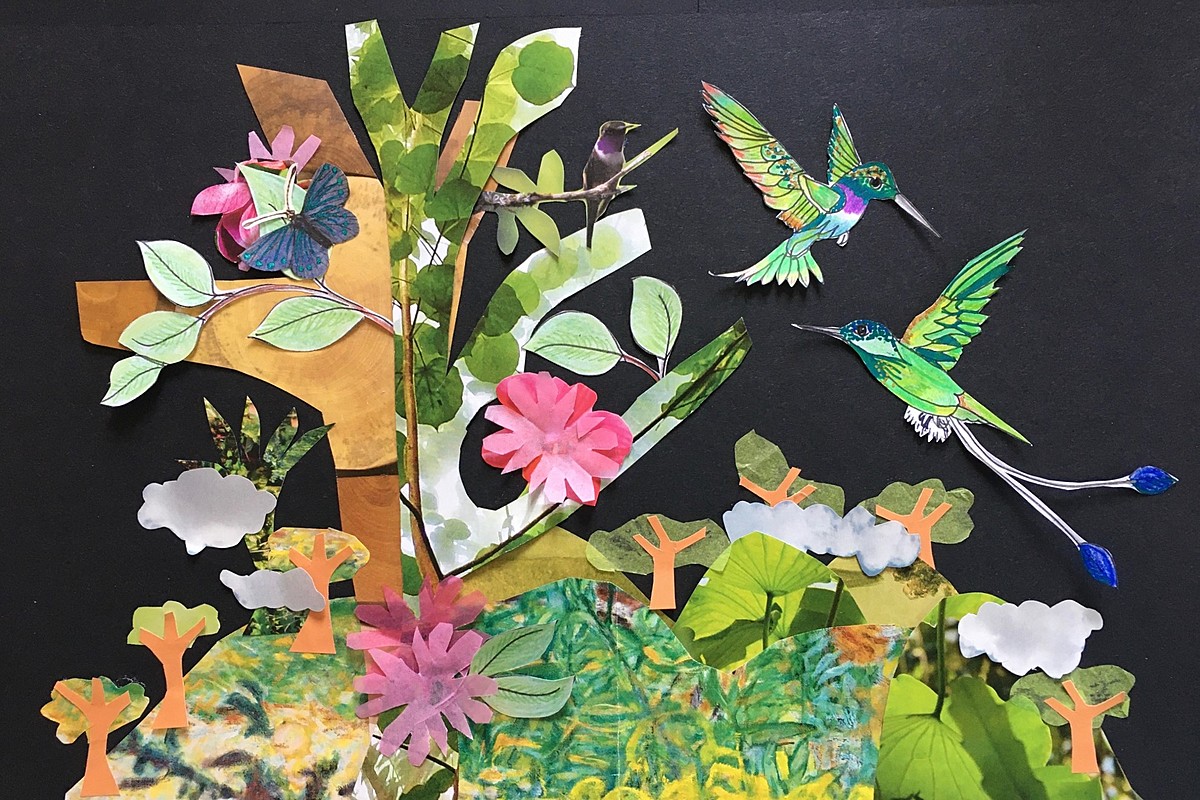 Quest for a Quetzal

Alanza was proud when she first got a job as a part-time bird guide. Her dad, Javier, was a bird-guide too, so Alanza felt she was destined to work with birds. Alanza lived with her family in the little town of Mindo in Ecuador.

Professor Paola who ran a reserve in the cloud forest had given Alanza a job because she said she had the three things a good bird-guide needs: a quick eye for spotting even the slightest flicker of a bird in the jungly leaves, a good ear for distinguishing the songs of different birds, and patience.

Some of the most beautiful birds in the world could be found in the cloud forest: quails and quetzals, toucans and trogans, vireos and vultures and, of course, hummingbirds.

The reserve was a place where people could stay and learn more about the forest. Some of those people were clever scientists doing research. Some of them were people on holiday from their own countries, interested in nature. Alanza’s dad worked there too.

The philosophy behind the reserve was to preserve the places the birds and other wildlife lived. The reserve stretched across three mountains and the valleys in between. Professor Paola wanted to extend it. One evening she gathered all the scientists and bird-guides together to announce a plan to raise money to buy more land for the animals and birds.

“My plan is in two parts,” said Professor Paola. “First: I am hoping my next book will sell particularly well.”

Everyone looked a little uncomfortable. The professor wrote books, full of careful research. She had just written a book about toucans. Now she was writing a book about hummingbirds.

Her books did not make much money: they were long and complicated. Her hummingbird book was not about the birds’ beautiful colours or crazy-fast wings. The title was BIRDS, BONES AND BALANCE, Pneumatization in Trochilidae. Trochilidae is the scientific name for hummingbirds. Pneumatization is the way birds’ bones become extra-light for flight by almost ‘growing’ hollow places. This was interesting to a birdy person like Alanza but not likely to sell millions of copies and make money to extend the reserve.

“Secondly,” Professor Paola continued, “there have been rumours from tourists in town of a strange quetzal being seen. Instead of scarlet front-feathers and turquoise head-back-and-tail-feathers like a resplendent quetzal, its colours are the other way round. Such a bird would be a sensation and bring bird-lovers flocking from all over the world to the reserve.”

Alanza’s heart was beating with excitement. A new bird?! And she might be the one to find it.

“Tomorrow we will begin searching. Be early.”

Resplendent quetzals are probably the most admired of all the quetzals: they are resplendent in colour (very shiny) and in feathers (crests and long flowing tails). In the very old days, tribes in the forest would collect their feathers and wear them in battle, for luck.

Alanza loved all birds but she preferred delicate hummingbirds and all their weird and wonderful varieties and names, like the booted-racket-tail, with its fluffy legs and long blue-tipped tail-feathers, or the Andean emerald, with feathers that splintered into a rainbow of bright burning blues whenever it caught the sunlight. To find a new bird would be amazing. She was very excited.

She and her dad got up at 4am. Alanza said goodbye in whispers to her mum, who was awake, and tiptoed out, so as not to disturb her three little brothers, fast asleep.

They set off up the bumpy road to the reserve. Thirty people had gathered. The professor put everyone in pairs, Alanza with her dad. Maps and radios were given out as there was no phone signal up in the cloud forest.

Each pair was to start on specific tracks, spreading out in a star-shape from the lodge. They must check-in, for safety, every 90 minutes. Alanza and Javier had been given the southern tip of the reserve, Alanza’s favourite bit of jungle. They switched on their head-torches, and stepped out into the dark.

The dark of the forest was punctuated by the flicker of torches. The crescent moon was a thin slice of light in the sky. Dawn would come soon.

Javier was worried Alanza was too hopeful. “I expect the tourist got confused or mixed up about the colours.”

Alanza knew he was right. “But new birds are possible, aren’t they, Dad? So it might exist.”

They walked down to the very edge of the reserve where Alanza had seen quetzals before. They would walk in zigzags, checking the trees with their binoculars. Each zig and each zag was about 2 kilometres long, so it would take a long time.

Just before sunrise came the sound of the forest waking: squeaking, tweeting, warbling, rustling, whooping, whistling and trilling. Alanza checked her quetzal trees. She saw two ordinary quetzals, perched and quiet, nothing out of the ordinary.

They zigzagged steadily, stopping constantly to train their binoculars on every tree they could see and listen for the long hoo-ooping quetzal-voice. They checked-in with the professor regularly and paused for snacks. They sometimes saw something unusually red or the flick of a long tail or a flurry of turquoise feathers but in the end, every bird was a bird they knew. By noon, Alanza was tired.

“Have a rest while I check-in,” said her dad.  The air was full of the fluttery hum of hummingbirds gathering nectar from bushes in a clearing nearby, shrilling over the sweetest flowers. Alanza picked up her binoculars to see them better. She followed a purple-throated woodstar to a tree. The next moment she had leapt to her feet and was walking in the very slowest slow motion towards the tree. What had she seen? Was she imagining it?

There, high in the tree, sitting quite calmly, was a quetzal with a red crest, back and tail, a turquoise chest. Yes. YES!!

Javier had seen Alanza jump up quickly with an intensely thoughtful expression on her face. He told the Professor, still on the radio, “Alanza’s seen something.” He walked softly over himself and passed over the radio to Alanza while he took out his own binoculars. Alanza told Professor Paola exactly what she could see and exactly where they were.

All the searchers gathered in the little clearing to witness the extraordinary bird for themselves; cameras, clicking quietly, captured the bird on film. The professor gave instructions for the pictures to be sent world-wide so everyone would know a new quetzal had been sighted on the reserve. All the time the bird was looking down on them, occasionally turning its head, undisturbed by the attention and fuss.

At five, dark began to fall in the forest. No one had stirred for ages, all fascinated and excited. Alanza was almost swaying with tiredness. The others began to move back to the path, leaving Javier, Professor Paola and Alanza. Perhaps surprised at all the movement, the quetzal suddenly rose from the tree and in a moment of swooping tail and flash of bright colours, it disappeared into the leaves.

footnote:
If you love Nature, you will know that a new species is not ‘found’ quickly, a great deal of research and checking is needed, but in such a way, a new discovery might begin.