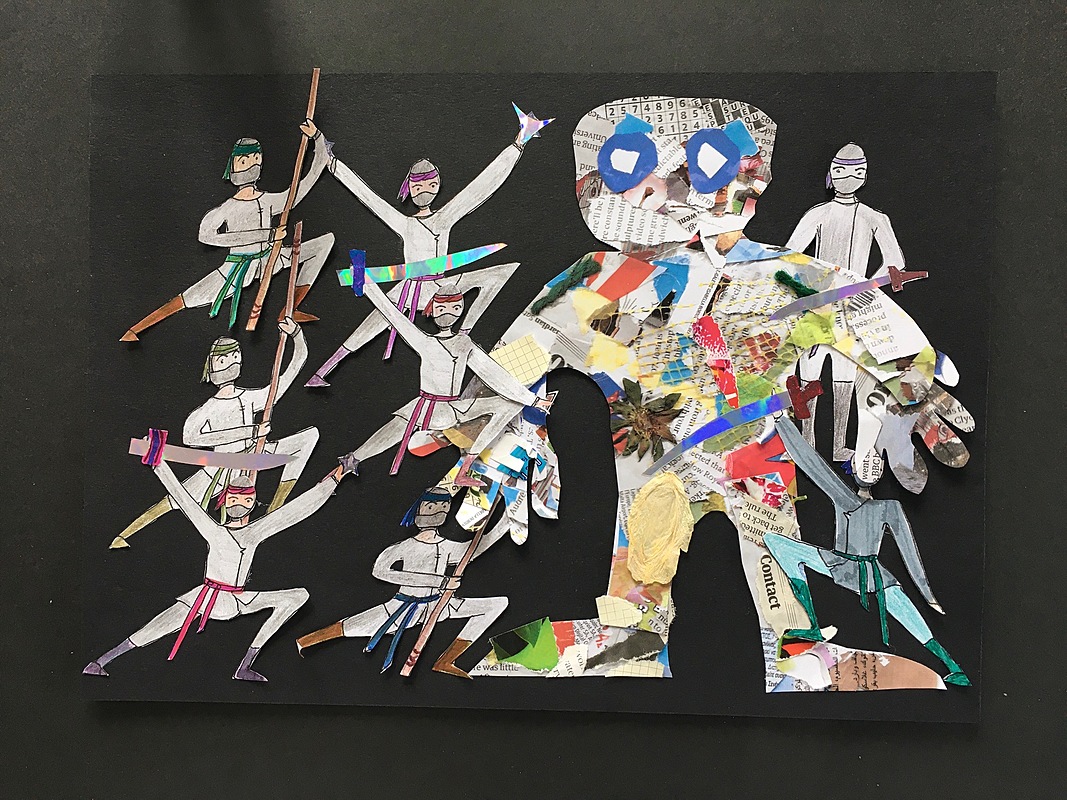 A story inspired by 10 words chosen by James Mcivor

Josh looked out of his bedroom window at the wet November evening and saw a garbage truck splashing and beeping as it collected the rubbish from house after house in his road. The bin men were shadowy figures moving in the rain. He wondered if it felt like a good or bad job, to collect what everyone hated, the yucky leftovers of food and packaging, leaflets and letters, old newspapers and unwanted household items?

His homework was to list heroes: he had mentioned those who fought great battles and those who did difficult things. He had included doctors, nurses and carers, postmen and teachers, bus drivers and shop assistants, all of whose jobs sometimes needed bravery.

He was wondering about adding super-heroes as well, when his mum called up the stairs. “Time for tea.”

His mum was a doctor AND made very good Spaghetti Bolognese, which made her a super-hero as far as he was concerned.

He did not see that in the wet darkness a giant hand was rising up out of the garbage truck.

Eight ninja warriors were standing on Josh’s lawn, with a weapon in each hand. In the middle of the ninja circle was a huge figure. It had arms and legs and a strange square head. It was made entirely of rubbish. It lifted its head towards the dark sky and howled. The sound was terrible.

The chief ninja gave the signal and the ninjas attacked the monster with their swords. Bits of its body, papers and boxes, plastic wrappers and bottles, fell to the ground but after an instant lying on the grass the pieces flew back and became part of the monster’s body again.

“Enough!” called the chief. “We are not defeating the monster but we can make it follow us into the forest.” She dived forward, cut off the cardboard box that was the monster’s left foot and, picking it up, began to run.

The monster rushed after her, limping and howling.

Josh had been woken by the noise and looked out of his window but saw only an empty garden with quiet trees and some rubbish on the grass that had not been there before. Careful not to wake his mum, who had had a long shift and was sleeping deeply, he went to investigate.

Josh could see the rubbish was definitely not theirs. There were packets from cakes and crisps his mother would never buy, plastic containers from a take-away. Hearing a sound, he hid quickly. When he saw the figure of a ninja step out of the bushes, he could not believe his eyes. He knew that ninjas were not just fighting turtles from a movie but warriors from ancient times in Japan. That still did not explain why there was one in his garden in Southfields.

He was close to the shed and saw, lying in the grass, the long silver blade of a ninja sword. He grabbed it and boldly stepped out of his hiding place.

“Looking for this?” he asked, looking straight at the masked warrior.

With a clever flick of the wrist, the ninja soon whisked the sword out of Josh’s hands and into his own.

“You are brave to challenge a ninja,” he said. “I dropped this in a battle with our new enemy.”

“A new enemy? A battle? In my garden?” Josh pictured a cunningly evil villain or a ghastly creature oozing slime with poisonous fangs, trampling on his mum’s flowers.

“So far our skills have failed to defeat him. We have feared an uprising in the rubbish for some months. People throw things away so carelessly, forgetting the consequences. Great monsters are created where there is great wrong. Now the rubbish is a monster twenty feet tall and seeking revenge on Southfields.”

Josh wanted to see this monster. The ninja agreed. “You have shown a ninja heart by defending your own garden. Come with me.”

Josh followed the ninja through the back of the garden and into the forest.

There was the monster, toweringly huge, with staring eyes. The ninjas kept chopping at it with their swift silver blades. When Josh heard the monster howl at each attack he felt a sudden pity.  There was something wrong with all this. If the creature had been made of people’s rubbish, surely it was they who were to blame? How could the monster help being waste? He dashed into the middle of the circle where the monster stood alone and cried out, “Stop!”

The monster and the ninjas were so surprised that everyone did stop. Josh said, “Please! Just let me try to talk to him.”

The chief ninja lowered her blade and the others followed suit. They watched silently as Josh approached the monster. Could it speak?

Josh asked the monster what was wrong. By grunts and signs and occasionally using words from the packages and newspaper that formed his body, the monster explained that he was made from rubbish put in the wrong bins, from excess packaging, from rubbish that wasn’t being recycled in Josh’s street. The rubbish from the whole of Southfields would gather into a greater monster before morning.

The chief ninja looked grave. “We are so few. There are only eight of us. If I were a centurion with a hundred soldiers to do my bidding maybe we’d have a chance.”

“But I have friends who can help,” said Josh. “More than a hundred. The 504 families at my school.”

The monster said the other rubbish would not rebel until dawn. Josh began to make phone calls and from the houses and flats of Southfields people answered his calls. His friends came with brothers, sisters and parents, armed with torches, to see the monster for themselves.

The monster explained how a bigger monster would grow unless the rubbish could be rightly sorted, with anything recyclable put in the right bins. Josh shouted “Go!” and everyone dived back to their homes and the homes of their neighbours to sort their rubbish before daylight.

Josh was left with the monster.

“What about you?” he asked looking into the blue plastic bags of the monster’s eyes.

“You must sort me,” said the monster.

Josh was gentle. He sorted the monster into recyclable and non-recyclable, separating plastics and paper until the monster had almost gone.

Josh looked sadly into the monster’s face. “Don’t be sad,” said the monster. “Putting me in the right place is sending me home.”

By morning everything had been sorted rightly. Many people felt bad that they had put out their rubbish so carelessly and everyone promised they would be different in the future.

Josh went back home. He was closing the back gate when he heard a sound behind him. The eight ninjas were whizzing over the wall and on to the grass.

The chief ninja stepped forward. “You have been a brave warrior tonight,” she said. “You are now one of us, number nine in our Southfields ninja clan. You used a weapon tonight that we sometimes forget. You used your ears and listened. You found out what was wrong and did something about it.” The ninjas made a low bow to Josh then whizzed away into the sunrise