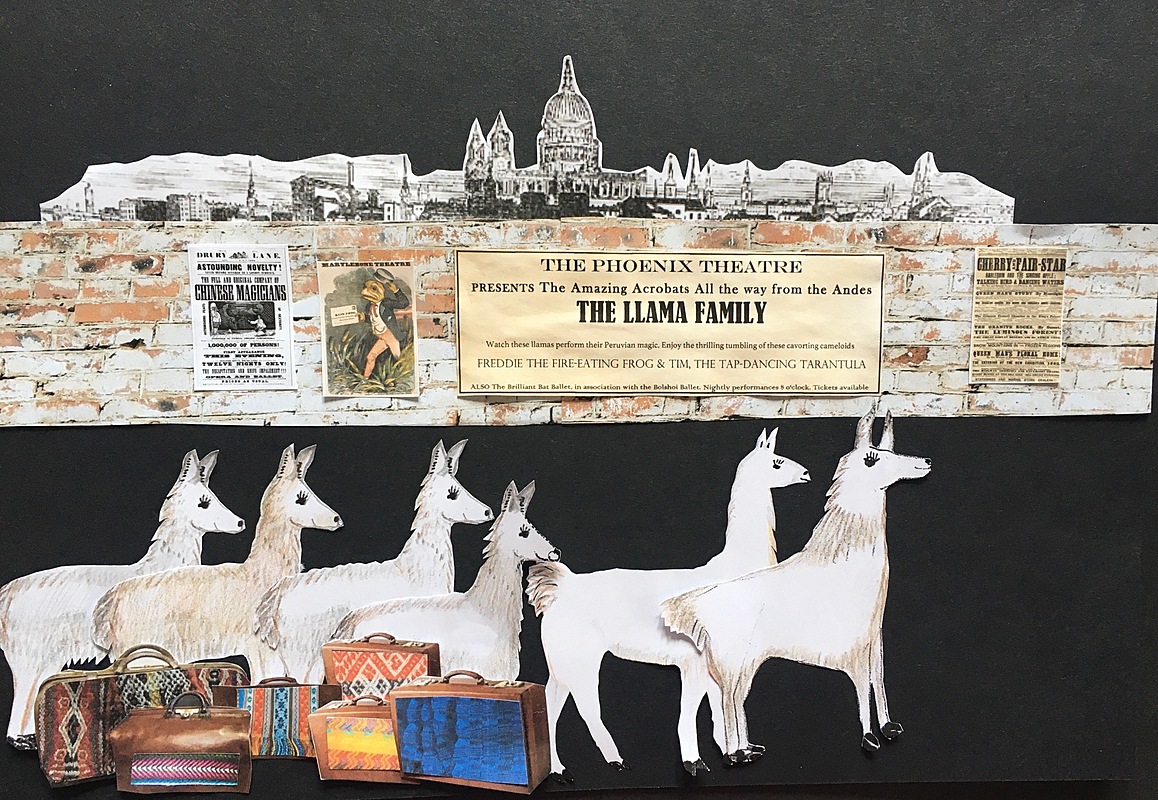 The ship swung into harbour and the Llama family (a mum, a dad and four girls) stood on the deck with the wind ruffling their woolly hair. They had arrived in England in April after a long voyage from South America involving trains and ships and were heading for London. They were a family of performers who had travelled all the way from Peru to perform in a London show at the Phoenix Theatre. They were very, very excited to be on such an amazing adventure.

They left the boat carrying their luggage and were soon on a train, the steam rushing past the windows as they raced through the English countryside, so very different from their home high in the Andes.

The train whistled, the brakes squealed and the Llamas screeched with excitement as they arrived in Waterloo Station. Here, at last, was London. Papa led them through busy streets. “Look!” cried Mama, pointing to a large poster. “It’s us!” There were posters advertising the show and the Llama family were at the top!

“Welcome!” shouted a voice. It was a huge lion, drawing them out of the busy streets and in through the stage door. “Welcome to my theatre and to the greatest variety show on earth!”

Luciano was the theatre manager. He was in charge of everyone and everything. The Llama family had a big dressing room. Next door was Freddie, the fire-eating frog, and on the other side was The Bat Ballet. Everyone was very friendly and the Llamas felt immediately at home.

The next day was spent rehearsing. The family were acrobats. All day they practised their jumps and tumbles. Luciano had decided they should open the show.

The family were nervous and could not settle. Mama had to tell them a bedtime story about a little alpaca. Eventually they all fell asleep to dream about home.

The next day rushed by until it was time for the performance. Luciano knocked at their door, wearing a black tailcoat - very useful because, of course, he had a tail -and carrying a top hat. He was looking troubled.

“I’m very worried,” he said. “Usually we take care that tickets are sold sensibly. It means we can keep audience members safe but the front row tickets have been sold to the Royal School of Mice.”

“Surely that’s fine. Everyone will be able to see over the heads of the little ones and they will be close to the stage and can see everything perfectly. No problem.”

“But behind them there are the cast of Cats. They have come specially to support the show. Do you know the musical? 57 cats, cats who are nimble and quick and good at dancing, behind a row of possibly delicious tiny mice.”

Luciano went to make sure that the cats and mice would be kept carefully separate and the Llama family took their places. The performance was about to begin.

Llamas are often good at dancing and singing. Their singing sounds like pipes, they make fluting sounds through their thick lips and hum deeply. They have neat hooves, ideal for dancing, and a good sense of rhythm. This Llama family was something quite different. The four girls were very flexible. They could balance on one hoof, spring into somersaults and even cartwheel, very unusual for four-legged animals. Mama and Papa Llama did most of the lifts. They were strong and safe. Audiences in Lima loved them. What was London going to think?

Luciano announced them in his huge booming voice. “They have crossed the seas, ladies and gentlemen. They are the pride of Peru, the stars of South America: The Astonishing Acrobats from the Andes!”

The little mice at the front clapped their tiny paws and the cats at the back cheered. The four girls began turning and tumbling through the air in a whirl of foamy white and brown fur. The audience gasped at their speed and grace. At the end the whole family formed a tower on the strong back of their dad. There was a great roar and applause as loud as an earthquake.

The family ran off stage. “Wonderful!” whispered Luciano and stepped out to announce Freddie.

Nobody but the smallest mouse on the front row saw what happened next. He called out “NOOooooo!” as loud as he could as a warning but no one was listening.

As Luciano stepped on to the stage to introduce Freddie the fire-eating frog, he stepped on the metal box where Freddie kept his flames.

The box fell open and a tiny spark caught hold of Luciano’s gloriously golden tail, then it leapt to a curtain.

The smallest mouse who had seen this, kept shouting his loudest. The llama sisters heard him and so did the Bat Ballet, standing ready for their turn. The llama sisters dashed forward and squashed the flame on Luciano’s tail. The bats flew through the audience, telling them to leave the theatre in an orderly way. Freddie grabbed a bucket of water to attack the flames on the curtains. The animals in the audience kept calm and left quickly. Wonderfully, the cats helped all the mice escape safely.

By the time the fire engine had arrived and the hoses were in action, the theatre had emptied; Papa and Mama Llama had gone backstage and got all the performers and theatre workers safely out of the building. Luciano waited to hear what the firemen would say. At last, the chief fire officer came over.

“It’s good news and bad news. Everyone is safe. That’s amazing and well done on your health and safety. But there is some serious damage to the oldest part of the theatre and our experts think it will take 2 or 3 months before things can be repaired. You’ll have to close.”

Luciano stood on the pavement with tears running down his golden nose. “We must cancel the show. Forgive me crying but I’m not a robot,” he said. “This breaks my heart.”

As everyone stood gloomily with Luciano on the pavement outside the Phoenix, a tiny hand patted Mama Llama. It was Tim, the tap-dancing tarantula. “What’s happening?” he asked. “I missed what the fireman said.”

“The Phoenix has to close. Luciano is heart-broken and we’ll all be very stuck with no jobs. We llamas were hoping to earn enough money from the show for the journey back home.”

Tim went over to Luciano and climbed up to speak in his ear. The llamas could see lots of talking and the waving of arms then the expression on Luciano’s face began to change to a grin. “Gather round everyone. Tim here has saved the day.”

Tim had a friend who worked at a theatre in Blackpool, The Grand. That theatre was going to close because they only had one act, a mermaid. No one was much interested in mythical creatures these days, and the mermaid was really a dolphin in disguise. Tim suggested Luciano should ring the theatre in Blackpool and move the show there for 3 months, while the Phoenix was repaired.

The performers all cheered, arrangements were made and the llamas found themselves, with all their friends, on a train going north.

Blackpool was brilliant. The show was a huge success and between performances there was time to walk on the beach and eat ice cream. The Llama family opened and closed every show and even the dolphin-mermaid was described as “delightful” in the papers.

On the last day of July, the show ended. The llamas packed their bags for Peru and left Blackpool, saying goodbye to all their new friends, inviting them to stay in the Andes if they ever came to South America. Four days later they were on board ship, the engines loud, the wind ruffling their coats and the girls munching Blackpool Rock, which was very bad for their teeth.

“We loved London,” said the girls. “But Blackpool was even better.”

“We had a Lovely Llama Drama,” said Mama Llama.

And all the others agreed.