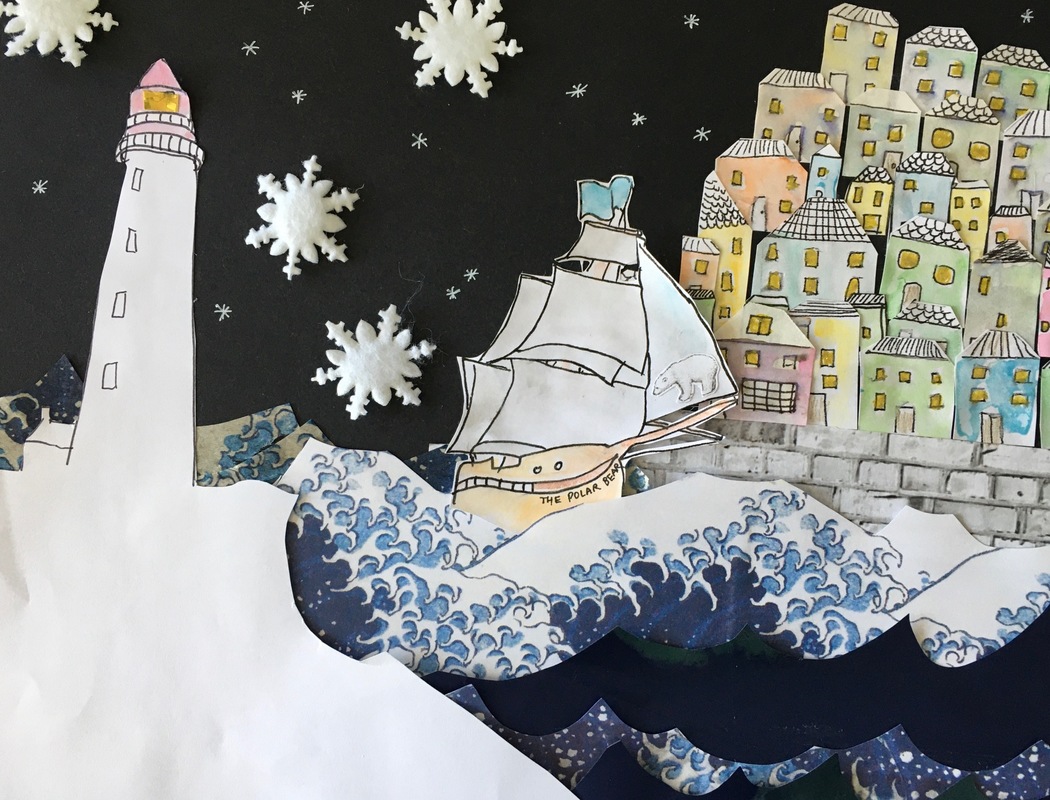 The Voyage of the Polar Bear

The great ship, The Polar Bear, came into town on a snowy afternoon when all sensible people had wisely decided to snuggle down at home with cups of cocoa, books and board games. Zac was the first person to catch sight of her as she rounded the harbour wall. He had just volunteered to go down and fetch more biscuits from the kitchen. This was particularly kind of him as Zac lived with his family in the lighthouse and going downstairs meant a lot of stairs, fourteen flights of seven to be precise. He looked out of the window half-way down, seeing first only the falling snowflakes and the lights, like warm bright eyes, flickering in windows of the houses in the town, and then there she was, a great white boat, turning out of the wild ocean into the safe harbour, her flags and sails flapping wildly in the gusty wind.

He called upstairs. “It’s a ship! It might be the Bear!”

“Wrap up warm and be careful because it’s very slippy,” warned Jim. Zac and Pen were soon walking through snow as heavy as sand. It was higher than the top of Zac’s boots and kept tumbling in until his toes became so cold he could not feel them but he felt tinglingly warm with excitement because The Polar Bear was home.

Zac and Pen found the ship moored by the time they reached town and they could hear the voice of the Captain, Red Peg, shouting at the sailors to leave unloading everything till the morning, to go home to their families.

“Peg! Peg!” called Zac. His voice carried through the snow and Peg appeared at the edge of the ship, her bright red hair swirling round her, like fire against the snow. “I’ll meet you at The Flounder!” she shouted. “I won’t be long.”

Zac and Pen made their way to the inn. It was always busy in The Flounder when a ship came in. Red Peg was Zac’s aunt and Pen’s sister and would be staying up at the lighthouse but, like the rest of her crew, she always celebrated at The Flounder when she got home. They sat in the snug warm waiting for her.

Peg arrived at last and was soon drinking hot soup and telling tales of the trip with the strange excitement that came to those back on land after months at sea. Pen and Peg had promised Zac that he could voyage with The Bear when he was eleven. He sat stroking the warm furry body of the Flounder’s ginger cat thinking, next time those adventures will be mine.

Peg and The Polar Bear worked for the Navy, doing small but important jobs. There were two main areas. Firstly, they carried 5 science officers and a cartographer. A cartographer is someone who makes maps. The Bear’s scientists recorded not only the shapes of land and sea but the birds and animals, and linked them to the time of year they were seen to create a whole picture of who walked, flew, hunted and swam, where and when.

Their second job was to act as pirate-police. There were still a few pirates left. Mostly they were badly-behaved old sea-burglars rather than vicious-murderers. Peg and the Polar Bear patrolled the seas with the tasks of teaching pirates there were better things to be than bad, and keeping other people safe.

Zac was eleven in March and The Bear was to sail in May. Pen began to prepare Zac. She made special clothes for hot and cold weather. She taught him exercises for small spaces and some cooking and first-aid skills. She chose seven good storybooks and bought seven notebooks with green covers and a box of pencils so he could write his own stories and thoughts. She packed a box of his favourite food and she tried very hard not to cry the day The Bear set sail with Zac aboard, waving goodbye.

Life on board quickly settled into a routine. Zac was always up early and in bed early and very busy in between. A cabin boy tends to do all the jobs no one else wants to and is usually the lightest member of the crew so he can climb the rigging very easily and is often the look-out with a telescope looking for land or whales or pirates or icebergs when everyone else is relaxing. Zac had expected this as both Pen and Peg had done the job when they were Zac’s age and had told him all their adventures.

He was allowed to help the scientists and he learned things about maps, animals, birds and weather. They began by travelling north to the islands of Greenland and Canada. Zac particularly enjoyed sighting his first polar bear family.

After three months in the north they turned south to patrol for pirates. Red Peg was looking for two in particular: David Daniels and his ship, The Snap Dragon, and Daniel Davis and his ship, The Fish Finger. For years Peg had been trying to get the two pirates to stop being pirates. She told Zac all about it as they stood on deck. “Any ideas?” she asked.

“But what are they supposed to be?” Zac asked back. “Of course they must stop being bad, but maybe they need some new suggestions for jobs, something they would like to be more than pirates?”

“Brilliant!” said Peg, full of praise for his good question. “I’ve just been telling them off all these years. You are quite right. And we need to think up some good ideas at once because I can see The Snap Dragon coming this way on the starboard side and The Fish Finger on the port side. This could be ticklish.”

Peg’s word ‘ticklish’ seemed to mean that the Polar Bear would be attacked on both sides by pirates. Peg’s crew were skilled swordsmen and the pirates were old men so the attack was soon over. No one was hurt. Zac was a bit disappointed it wasn’t more dangerous but was pleased that Peg had invited him to the peace talks.

“Gentlemen,” she said to the two pirates where they sat tied up in her cabin. “I am going to leave you to talk with young Zac here and when I come back, I’ll release you, I’ll listen and we’ll make a plan.”

Zac was shy at first but Daniel Davis and David Daniels seemed perfectly friendly and happy to chat about pirate-life, the bits they loved and the bits they hated. They confessed they did not really like fighting now they were old and not so good at it. They did not even like buried treasure. “I’d like to dig mine up and spend it,” said Daniel. They did enjoy fishing and looking for things. “I love searching,” said David. They both said if they ever settled down that they would quite like a garden, Daniel for flowers and David for food.

When Peg came back the pirates were released and everyone had afternoon tea.

In the end it was agreed that The Snap Dragon could join the Navy’s lost property department, giving the sea a good clean up, wherever they were, and returning anything found floating in it back to its owner. “Solving mysteries and searching the seas! Perfect!” said David, with much satisfaction. Daniel decided to dig up his buried treasure and fit out the Fish Finger as a takeaway, selling Fish and Chips around the world. Both would begin small gardens on the decks of their ships. The Fish Finger would grow fresh peas to go with the fish and chips and some green leaf salad and tomatoes. The Snap Dragon would grow flowers, including, of course, snapdragons. “And I might take up bees,” said David, as he spooned jam onto his scone, because I am very fond of honey.”

“Zac, you are amazing,” said Red Peg, as The Bear turned back towards home. “I thought we’d be teaching you the navy life and you taught me that I need to use my imagination more often. What are you imagining right now?”

Zac looked at the blue ocean and the horizon, beginning to glow golden in the sunset, and at his aunt, who looked so much like his mum.