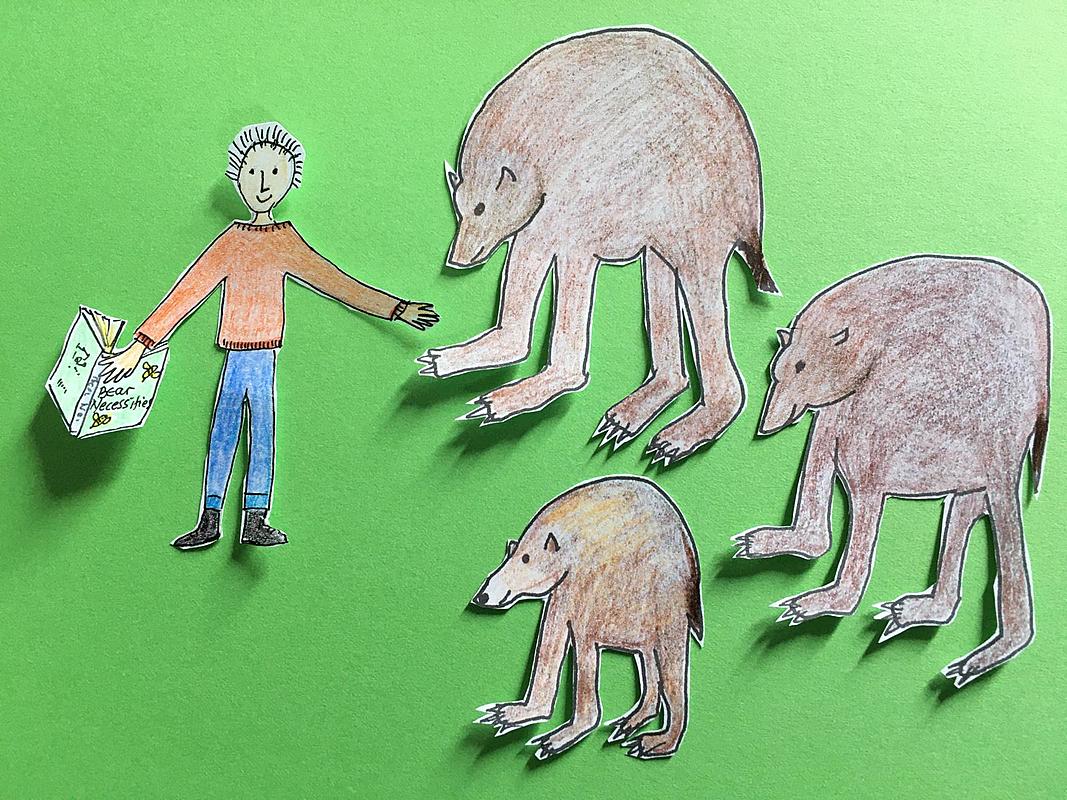 Deep in a dark forest, on the edge of a deep lake over which high mountains rose, snow-topped, against the blue sky, lived three bears. These were not the famous three bears of another story but, like those bears, they lived in a family of mother, father and baby bear.

On Friday afternoons in the summer a little boy came to clean the bears’ cottage. The boy was glad of the holiday job. The bears always paid him generously in golden honey and bags of porridge oats, which he took home to his mother. The boy was skillful in the cleaning; while he worked he would sing and at lunchtime he would always sit in the garden and read a book and eat the apple his mother gave him for lunch. When he had finished his work, the boy and the bears would all sit down for tea and orange cake, which was the mother bear’s speciality: a big frosted cake with chocolate bears for decoration.

So the next day, the father bear lent the boy an old bear coat that had been his grandmother’s and taught the boy how to use pointed sticks to collect honey without disturbing the bees and the boy taught the father, by carefully managing his long-clawed paws, to sew, to paint and knit. The boy went home and said to his mother that they could keep bees, now he had these skills, and the father bear painted a whole wall of the cottage and began knitting some socks for baby bear in yellow wool.

So the next day, the mother bear took the boy to a bend in the river. She taught him to watch the fish, to see when they would jump and then catch them at the exact moment they leapt into the air, and the boy, listening first to her usually grizzly growly sounds, began by teaching her deep humming and gradually helped her to find a mellow alto voice that had been there, under the growls, all along. The boy went home and told his mother he would be able to catch fish for her from now on and in the little cottage the mother bear could be heard, deep and low, singing the baby bear to sleep.

After a few weeks the baby bear said to the boy, “You can read with your eyes the stories in books. You are very clever. I wish I could do that but I have nothing to give in exchange.” The boy looked at the bear and smiled and said, “You could give me something I have wanted for many years and never found. You could be my friend.” The baby bear smiled back. “Of course. Of course.”

So after his cleaning job the boy would sit on a sunny rock, or under an umbrella-broad tree if it was raining, and teach the little bear to read. He showed him how letters make sounds and the sounds make words and the words make stories. The little bear showed the boy how to be friends, to walk and talk together, to sometimes disagree but always make up, to be happy together, to be sad together, to always share everything, even if one of you is a boy and the other is a bear. Every night the boy went home and told his mother now he could be happy because he had a friend and every night in the little cottage the voice of the little bear could be heard, reading his mother and father their bed-time story.

© Julie S Sharp  Summer 2017. A Story About Reading. Written for Learn To Love to Read.