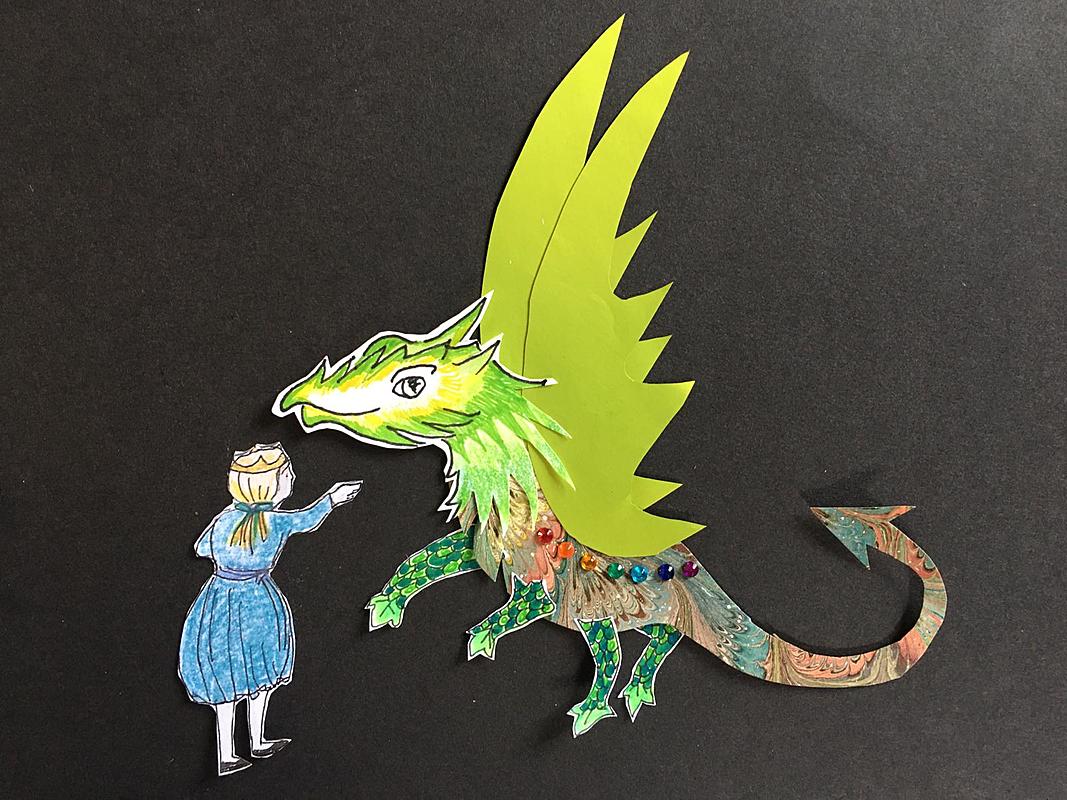 A story inspired by 10 words chosen by the Richford family

Hear the story read aloud by the author

Mr Wombat was a short man with twinkly green eyes, bushy whiskers, which he refused to shave, and a different coloured waistcoat for every day of the week. He had been teased about his name when he was at school and even his friends admitted he looked a little like a real wombat: he was soft and round, his nose was snuffly (he often had a cold) and his ears were very slightly hairy.

One Monday Mr Wombat wore a cheerful yellow waistcoat as he opened up his shop.

“I would like a wonderful cake,” said Mr Wombat’s friend, Miss Victoria, stepping inside briskly.

Mr Wombat asked in other shops; he checked in magazines and phoned bakers and chefs until at last, two days later, a yummy cake was made: golden sponge with a hint of honey; layers of raspberries and strawberries with a scattering of cherries; freshly-whipped cream with a sprinkling of icing sugar.

“A wonder!” said Miss Victoria as she munched the first slice.

One Wednesday Mr Wombat wore a bright red waistcoat as he opened up his shop.

“I would like a wonderful hat,” said Mr Wombat’s friend Doctor James, stepping inside eagerly.

Mr Wombat asked in other towns and checked on-line and phoned hat-makers and fashion-designers until at last, five days later, a marvellous hat was made. The brim was covered in dark grey silk and the top was tall black velvet with a deep purple ribbon and if you looked very closely there were tiny medicine bottles and bandages embroidered in silver on the ribbon so it was perfect for the doctor.

“A wonder!” said Doctor James, turning it slowly in his hands and putting it on his head.

One Friday, Mr Wombat, wearing his blue waistcoat, got a bit of a surprise. On the doorstep of The Wonder Shop, waiting gloomily, was a very small princess.

“Your Highness,” he said, bowing, because princesses are always called “Highness”, even if they are not very high at all. “Can I help you?”

“Someone I know has been telling me that princesses often have something wonderful about them,” said the princess, with a slight wobble in her voice.

“So do ordinary people,” said Mr Wombat, thinking of his friends.

“And they told me that without a wonder I am hardly a princess at all.”

Mr Wombat was curious about this “someone” who had been saying such difficult things to the little princess.

“So I need a wonder,” said the princess. “And I have heard that your shop is just the place.”

Mr Wombat thought of his recent successes with cakes and hats. Here was a princess shopping for a wonder and trusting he would help her. He was determined he would.

“I was thinking,” said the princess, “of great beauty, or a palace made of ice, or the moon in a glass, but I have decided …” She paused. “On a dragon.”

Mr Wombat was very surprised but relieved not to have to build an ice palace or catch the moon in a glass or change the little princess, who he thought quite lovely as she was.

This wonder was going to be one of the biggest challenges Mr Wombat had ever had. He phoned zoos and zookeepers; he phoned animal trainers and pet shops; he phoned vets, but he got nowhere. After four days he told his friend Miss Victoria he was afraid he was stuck.

“Where do you think dragons could be?” he asked.

“All I have ever heard about dragons came from books,” said Miss Victoria. “Have you tried the library?”

At once Mr Wombat dashed off to the library and got out armfuls of books on dragons. He stayed up all night reading them and in the morning he felt better. He had ideas about where to look. He would start with English caves then move on to Scottish lochs, then to Ireland and the Welsh mountains. He had a plan.

On Thursday night he arrived back at the shop at midnight. He was walking slowly and talking to a shape that walked beside him. As they stepped into the shop something surprising at the bottom edge of the shape shone in the moonlight. A minty green foot.

It was Friday and the princess was sitting on the step when Mr Wombat opened up the doors of the shop.

“Have you got it?” she asked breathlessly.

Mr Wombat saw her anxious face and was very glad to be able to say, “Yes!”

He told the princess to close her eyes and hold out her hands. She thought the dragon was still in an egg or very, very small but into her hands came something smooth and warm.

She opened her eyes at once and saw a dragon’s hand, shaking her own.

“I am very pleased to meet you,” said the dragon politely.

The dragon was just a little taller than the princess. He did have long claws but his hand-shake was gentle and his eyes were kind. His breath was whispery with smoke and his legs and feet were a bright minty green and the beautiful scales on his back shone like a rainbow in the morning sunshine. Mr Wombat, smiling, decided at once that he would have a rainbow waistcoat for special occasions from now on.

“A wonder!” cried the princess, delighted and feeling as if something very wonderful had happened to her at last.

Mr Wombat saw him lean forward and say something in the princess’s ear.

Thanks to The Story Spinner for this amazing Ten Word Tale. Watch out for another tale starting on Monday!