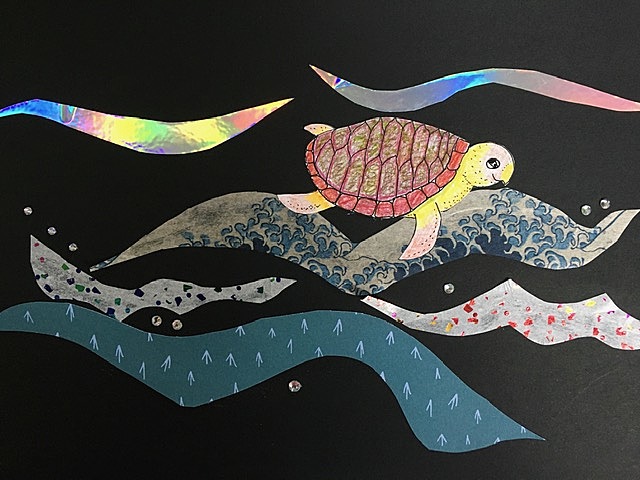 A story inspired by 10 words chosen by the Higgs family

On the very day he was born, Turbo the turtle had shown he could be fast. Turtles find it difficult to move on land but when Turbo came out of his egg in the sand he was the very first of all his brothers and sisters to reach the sea, sprinting straight for the waves, with flippers flapping and fast feet pushing against the wet sand. His mum and dad were very proud. They called him Turbo because a turbo-charger is one of the most efficient and energetic engines in the world and they believed that Turbo would be one of the very swiftest turtles in the ocean.

Things did not turn out that way.

When it comes to swimming, turtles normally fly through the water, as quickly as birds flying through the air, but not Turbo.

At sea-school Turbo enjoyed floating or wandering in the weed much better than swimming lessons. He could not seem to hurry. Every turtle was taught that swimming fast could save your life if you were being chased by an enemy in the ocean but Turbo liked to swim slowly. If there was a race he was always last.

“Oh dear,” said Turbo’s teacher, looking serious. His mum and dad were also worried. No one could teach Turbo to swim quickly and in the sea to be slow is very dangerous.

Nevertheless, Turbo was cheerful and had many friends in the underwater world as well as the turtles. He had fish friends, like Harry the hogfish and Santhi the snapper. When he asked them if he should worry about being slow they told him, “Yes! You need to be able to swim quickly away when there’s danger.”

He had young friends like Win the whale-calf and Sara the seal-pup. When he asked them if he should worry about being slow they told him, “Yes! You need to be able to swim swiftly to your mum or dad whenever there’s danger.”

He enjoyed talking to the old people of the sea because they had such interesting stories and Turbo was inquisitive about their lives. Una the red sea urchin lived in a Rock for Old Urchins near Turbo’s home and he often visited her on Sunday afternoons. He had to sit at distance because she was so prickly. When he asked her if he should worry about being slow she said, “Yes! Somebody might need help and you might need to be quick to save them.”

Turbo gave a great sigh. It was bad enough to think that by being slow he was in danger himself but it was much worse to think that he might put someone else in danger.

It might be time,” said Una, “to go to the Water Wizard for advice.”

Turbo decided Una was right. He told his mum and dad, his teacher and all his friends where he was going and set off.

The Water Wizard was not a good-and-evil-magic kind of wizard, he was simply the very wisest person in the sea; a walrus, with long tusks and long whiskers and a strange-shaped body that wibbled and wobbled when he laughed, which he did very often.

He lived in the cold seas of the north. Turbo wore a jumper knitted from sea-kelp by his mum to keep him warm and carried a present of brine-wine for the wizard. Turbo was hoping the Water Wizard would have a clever solution to his problem. Maybe soon he would be swimming home, quick as lightning, escaping enemies and rescuing those in trouble on the way.

Turbo travelled north for three months, at first with some dolphins, then some cod. At last, he met some seagulls who knew just where the Water Wizard lived.

The Water Wizard lived alone on an island. Turbo got to the edge of the waves and saw him lying on a mound of sand. Turbo flippered his way up the beach to the great Wizard.

Within a few minutes Turbo had told the Wizard about his whole life: his name, his slowness and how worried he was making everyone.

The Water Wizard thought for a bit, stroking his long bristly whiskers. “First of all, let’s remember that you deserve your name. You are one of the very quickest turtles on land I have ever seen. You came dashing up from the ocean just now with your flippers flashing. This might be useful in emergencies. You are rare among turtles.”

Turbo was much comforted.

“I also have a bit of an idea about speed in the sea,” said the Wizard.

“You will need to rest tonight and I will send a message to an old friend who can help us. You do not mind being helped by an old person?”

Turbo assured him he was very happy to be helped by anyone. He dug himself a comfortable hole in the sand next to the majestic body of the huge walrus and fell asleep, warm as toast, sheltered from the arctic winds by the wizard’s body, while the Wizard enjoyed the brine-wine and lay awake in the starlight, thinking.

Turbo woke up when the wobbly body of the Water Wizard started stretching and quivering as the walrus moved towards the sea. The Wizard waved towards a fin pointing up out of the water. “My oldest friend is Shane. He has agreed to help with some training.”

Turbo got into the water and a great shark swam straight towards him, his silvery fin looking like a knife. Turbo, alarmed, began to swim away from the shark, getting quicker and quicker. He felt the shark’s nose touch a flipper and found himself leaping into the air in terror. He heard the wizard shout “Excellent!” from the shore and the sound of laughter as the shark swam right up to Turbo and said. “Well done!”

Shane the shark turned out to be very friendly. Turbo tried not to be afraid but he could not help swimming away when he was being chased by a shark. Shane was much more scary than Turbo’s teacher at school, so scary he was almost exciting. He gave Turbo a hundred lessons in speed and skill. The lessons went very quickly so Turbo did not mind them at all. At the end of the day the shark and the walrus waved goodbye to Turbo who set off home to warmer waters.

On the way he avoided enemies, rescued a few prawns in peril and helped a beached dolphin, who was stuck on a sand-bank.

Three weeks later, Turbo arrived home. Everyone dashed out to greet him. Turbo was so quick now that even in a special race with his teacher he was the winner, flying past the finish.

“Oh wonderful!” said his teacher, shaking Turbo’s flipper, while all his friends and family cheered.