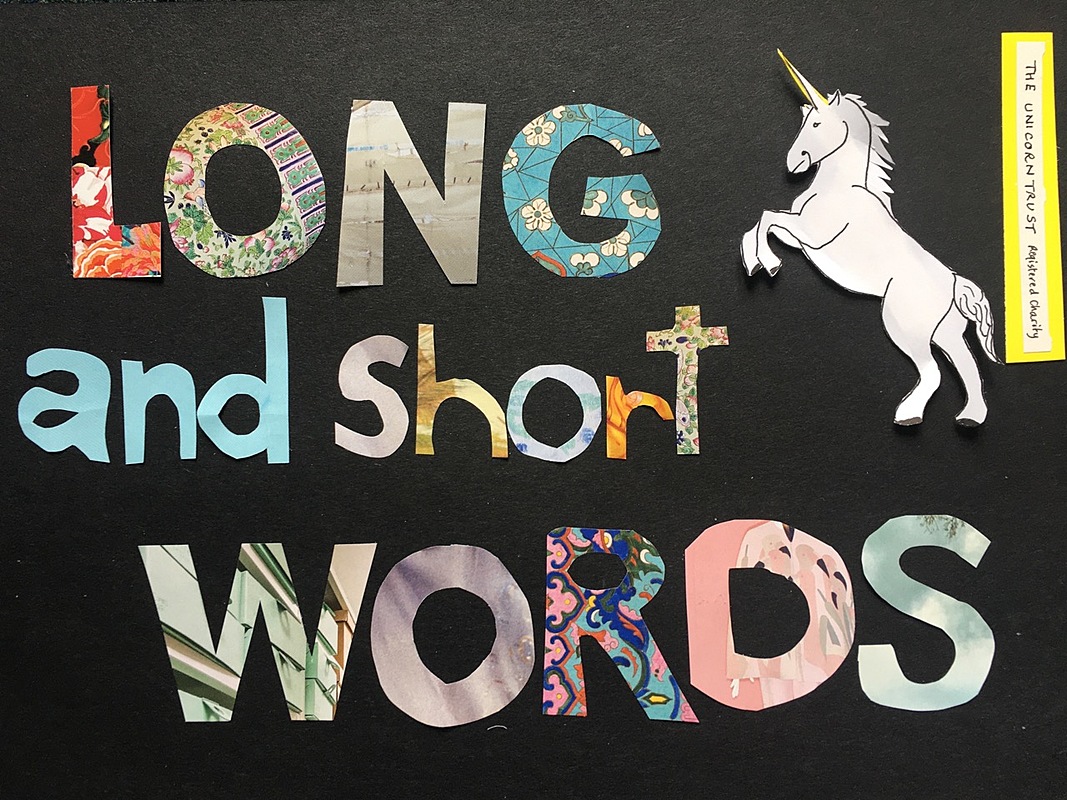 The Long and the Short of it

A story inspired by 10 words chosen by the Alleyne family

Have you ever been teased at school for something that is not your fault? Perhaps it is because you have extra big ears or are very small or because you are very quiet or a bit too loud?

Max was sometimes teased because people thought his language was strange. This was not because he spoke another language or because he made mistakes with his words. It was because his words were sometimes so complicated people were confused about what he meant.

Max was invited to the birthday party of his friend Ben. Ben had a big sponge cake with seven candles, spotted with smarties.

“It was delectable!” said Max.

Everyone at the party thought he was being rude. “Delectable” sounded like something nasty to them; an unknown word. They did not know it meant delicious.

Ben’s sister burst into tears and left the room.

All the children were shocked and horrified that Max’s word had spoiled everything.

Max didn’t dare even whisper that delectable meant delicious. He was dangerously close to bursting into tears himself. Instead he left the table quickly and quietly and went to wait on the front door step until his mum came to collect him.

Max had a good reason for his long and complicated words.

Max’s dad’s job was working on a new dictionary, which was going to be the biggest dictionary of English in the world.

Max’s mum’s job was translating German to English, and German was a language famous for long words, for example siebentausendzweihundertvierundfünfzig, which is 7,254. Long words in German are not really complicated when you understand that they are often just small easy words joined together like a sandwich.

At home, Max’s mum and dad used long and complicated words all the time. Max had been surrounded by them since he was a baby. He had picked them up like you might pick up the language of your parents if they spoke French to you or Javanese.

“Darling, do you want the last mincedmammalmouthful?” offered his mum, holding the last burger on the end of a fork.

“Coming for a walk later?” asked his dad. “I’m noticing horripilation, so bring a jumper.”

Max wished his father would use ordinary words, like goosebumps instead of horripilation; he knew the new dictionary had ordinary words in it as well as complicated ones, but he did not want to argue with his mum and dad as well as everyone at school. It was too lonely.

Max had a good friend called Lina. She had not been at Ben’s party because she had been ill, as she often was, but she had heard about it. She knew that Max would not be rude about a beautiful birthday cake and she looked up the word “delectable” in an old dictionary.

She was sitting in her garden, recovering in the sunshine, while her mum was gardening. She told her mum about Max’s problem with long difficult words.

“What do you mean?” asked Lina.

“If I said I had saved a delphinium ranunculaceae from certain death with a piece of string, would you know what I meant or does it make you feel stupid?”

“Not really,” said Lia. “I can guess. I can see what you are doing and you still have the string in your hands. That’s a clue. You are a purple-flower-rescuer.”

Lina’s mum smiled. “You need a plan to help Max,” she said.

“Or,” said her mum. “You need to change people’s minds about long ones.”

On the next day Lina was well enough to go school. She was so excited she was almost skipping. Together she and her mum had had a good idea. They had spoken to Max and his parents. They had spoken to the teacher of their class and the headmistress of their school, Miss Twirl. Everyone thought the idea was excellent.

Max spoke next. “Long words are not bad but I know they can confuse people. I want to be clearer. I also want to raise as much money for The Unicorn Trust as possible. The Trust is named after the unicorn, an amazing creature. When people believed in unicorns they believed they could heal people. I want to raise money to help people who are ill get better.”

Lina spoke next. “Sponsor Max and you will help many ill people. You will also learn new words and perhaps understand Max better. Ok?”

Everyone understood the plan and cheered for Max and for Lina.

The brilliant idea meant that everyone could use their strengths and even their weaknesses to raise money for The Unicorn Trust. Suddenly everyone was proud of things that had worried them before.

In the first week Max used long words, explaining them if necessary. In the second when he started using short ones, people started suggesting long ones he might used instead. Miss Twirl said that it had been an unforgettable experience: ever single year group had learned some new words. The German company Max’s mum worked for had heard all about it and they promised that if Max could raise £7254, they would match every pound. The Unicorn Trust was overjoyed to get £14,508 from Max and a further £1,202 from other children. At Friday break-time, everyone had Seema’s cakes and some juice to celebrate.

Lina was pleased she had helped Max. She thanked her mum for the idea. Her mum said Delphinium Ranunculeae started it.

Max was pleased that no one thought he was strange any more and if they did, they liked it.

Seema’s cakes were a sumptuous success.