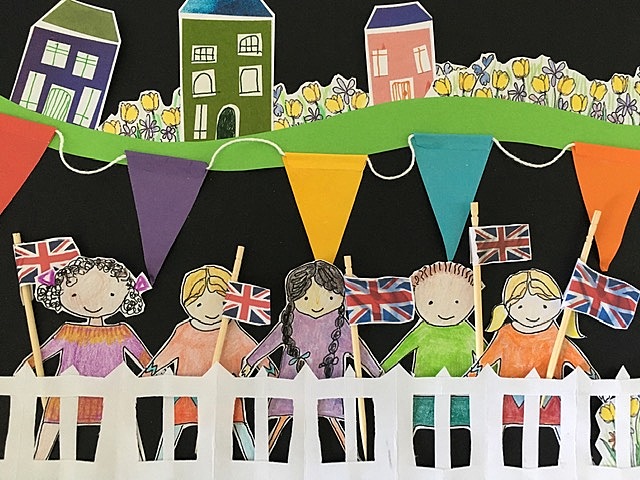 A story inspired by 10 words chosen by the Daoud family

The village of Blackberry-on-the-Mead was usually sleepy. A sleepy village is one where nothing very interesting or unusual happens.

Once, in Blackberry-on-the –Mead, or Berry as the locals called it, when Mr Jones took his dog Jack for a walk they went anti-clockwise round the pond, instead of the usual clockwise.

In the first two weeks of every April, Miss Frangipane, who ran the tea shop, The Victoria Sponge, went away to visit her sister in London. Then the shop was run by her nephew, George, who always went a bit wild, sometimes putting popping candy in the scones, for fun. These were the only adventures the village had ever had.

The village had a school and policeman. It had big houses and little houses and a medium-sized river, The Mead. It had a bookshop and a corner shop.

As well as the tea shop, there was Mr Jones’s pub, called The Quill and Quiver, and a French restaurant, called The Salmon en Croûte, which specialized in fish. The chef, Antoine, had the fish brought up specially from the nearby seaside town, by a girl on a bicycle, fresh every morning. And very tasty it was too.

No one suspected that anything would happen to wake the village up, but they were quite wrong.

The first hint of something exciting about to happen was when Mia, the girl who brought the fish up on the bicycle from the seaside town, burst into The Salmon, calling for Antoine.

“Antoine!” she called, putting the two heavy fish baskets down on the shining clean surfaces of the kitchen.

Antoine came in from the kitchen garden where he had been cutting herbs for his dishes.

“What’s the matter?” he asked. He had never seen Mia looking quite so animated and quite so fabulous. Her dark curly hair stuck out from her head and her eyes were bright and sparkling.

“Quick! I must borrow your phone. Tell me the number of the police station!”

Antoine told her the number. Mia showed by waving her hands wildly that she would explain everything in a minute, once she had spoken to the police.

“There’s a big car broken down on the bend in the sea road. There’s no signal for a mobile phone and I have brought the message. They need help with the car. Please do something extra quickly to help because you’ll never guess who is in the car!”

There was a pause but the policeman could not guess.

Within a very short time, everyone in the village had heard the news. Everyone was running round in excitement.

Mr Jones, who had been in the army when he was younger, called everyone to order.

“For all we know, the Queen will be taken off in another direction by a royal helicopter but just in case she comes this way, let’s make a sensible plan.”

Everyone agreed and soon a sensible plan took shape.

A retired mechanic went to help with the Queen’s car and Mr Jones drove his own car to bring the Queen to the village if she would like to visit and rest.

Antoine, George and Miss Frangipane decided on refreshments, in case the Queen was hungry. The village school children were divided into teams to make banners and flags. Everyone else was to tidy the village. This was an easy job as, unwittingly, they were perfectly prepared, having had a Best Berry Garden competition only the week before. All the gardens were at their finest and smartest, just needing some last minute trimming.

Mia had been sent as a messenger, because no phones worked in the bend in the sea road. She would bring news of what was happening. The children spilled out of the school, holding their flags. At last a flash of orange in the distance and Mia’s bicycle and Mia herself came into view.

Mia jumped off her bicycle and ran to help Antoine. The shops had quickly printed Welcome Your Majesty notices and put them in the windows. The village children stood at the edges of the road, with flags and voices ready for cheering. Everyone else stood in their gardens ready to wave.  Slowly Mr Jones’s old car came up the road with the Queen inside and there was a great roar as everyone cheered and waved their arms, their flags and their banners.

The Queen had a lovely lunch at Antoine’s, having salmon-en-croûte, which is fish in a crisp pastry parcel. She met lots of grown-ups.

The Queen went for some delicious cake at The Victoria Sponge. She met lots of children.

At half past three, the Queen’s own silver car, mended at last, arrived outside the pub where the Queen was drinking a last cup of coffee and chatting to Mr Jones about Jack. Jack did not realize that the Queen was the Queen but he enjoyed her patting him kindly and licked the royal hand until it was wet and sticky. Fortunately the Queen had so many dogs herself that she knew his enthusiastic slobber was meant as politely as the banners and flags and cheers.

It was almost time for the visit to end

Before she left, the Queen posed for a photograph that captured the amazing moment.

The youngest child in the school, holding the hand of the oldest child, gave the Queen a bunch of beautiful flowers. The Queen said, “Thank you.” She climbed in her car and the door was shut. The silver car set off. The Queen’s face was quite invisible through the dark glass of the window but her pale hand could just be seen, still waving.

Of course there was some clearing up to be done and the children wrote about the visit in school. Antoine became haunted by a nightmare in which the whole royal family and all their friends came to the village and he could not manage on his own so he asked Mia to join him in his restaurant. She was an excellent cook and a brilliant friend. He never had the nightmare again. A new boy, called Kali, brought the fish up from the sea on his scooter.

After a week, the only things to show that the Queen had visited were Kali’s scooter, making a phht phht sound on it way there and back, the stories on the classroom walls, and the photograph, which was copied many times and could be seen in every home.

The village seemed to go back to sleep almost at once.

But the Queen had not forgotten their kindness. A letter arrived from the palace, addressed to everyone

I am writing to thank you for the beautiful day you gave me last week. You rescued me in an emergency. You gave me delicious food, beautiful flowers and charming chat. If anyone ever tells you you are a sleepy village, you should reply that, when it mattered, you woke up and welcomed the Queen. I am sure that we will meet again. I will always remember you.

Love from
The Queen