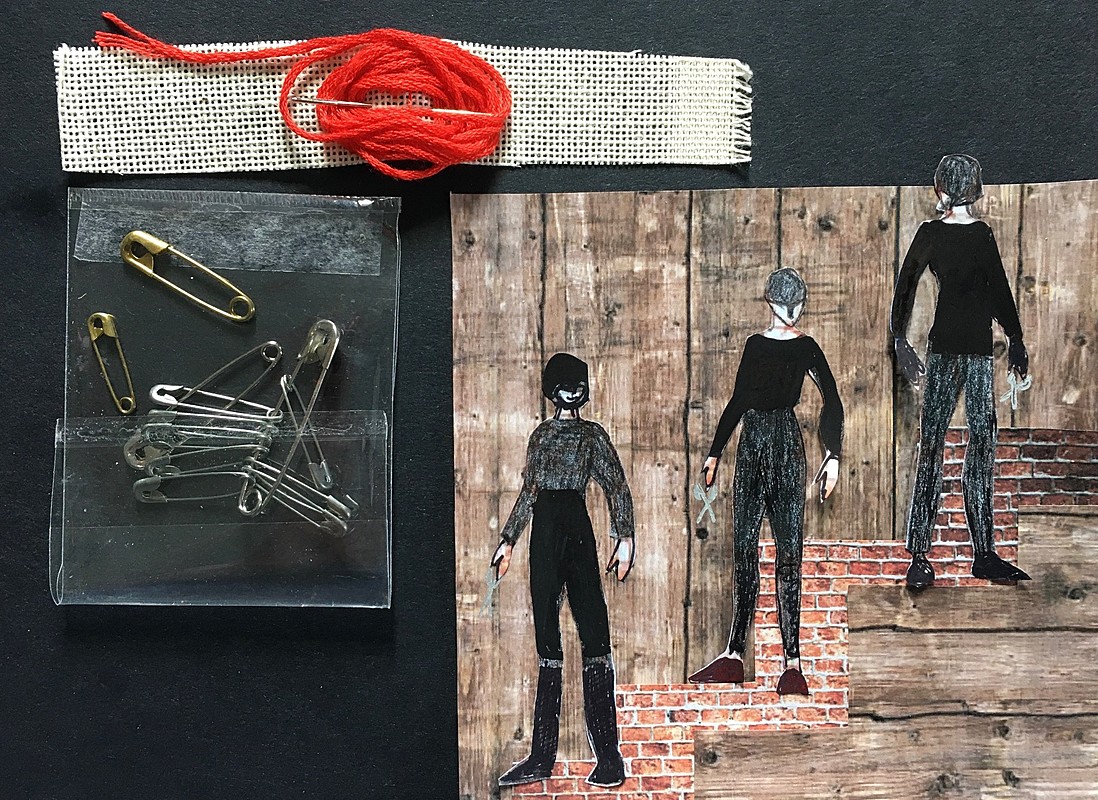 The Little Things that Matter

There was once a boy called Mercurio who was awesome at Art. He loved colours and ideas. His mum used to say to him, “It’s the little things that matter, Mercurio,” and he always paid attention to details in his designs.

When he was ten he won a drawing competition: a beautiful bird, shaped like a sparrow but with peacock-coloured feathers. When he was twelve he won a competition making a dress using bin liners and bottle tops. When he was twenty he was making wonderful wedding-dresses and magical costumes for films, still paying attention, as his mum always reminded him, to little details, like zips, bows, ribbons and lace.

Mercurio became so famous he opened a shop in London. The shop was called Zebra because for the very first year all his clothes were black and white. After this they were all the colours of the rainbow. They always had a tiny leaping zebra embroidered inside, a tiny detail to show where they were from.

Mercurio collected marvellous materials and people for his shop. He gathered silk from China, cotton from India, wool from Wales and alpaca from the Andes. He found English embroiderers, Spanish spinners, Norwegian knitters. In Africa he tracked down people to teach others about dyeing fabric in beautiful patterns. He chose fine tailors and skilled seamstresses from all over the globe.

Mercurio was a world-leader in the world of fashion. Everyone was enthusiastic about his designs. Although he was now a big success, Mercurio always remembered that little things matter.

In the world of fashion there are many people who are greedy for success. Even if you are brilliant, there can be trouble, even danger, from rivals. Mercurio’s amazing clothes had made some other designers very jealous.

One morning, early in the upstairs workshop of the London store, Mercurio was standing by a large wooden table, cutting pieces of deep-blue silk for a Snow Queen costume, a dress decorated with snowflakes. Each snowflake would be embroidered by hand; little details that made all the difference.

One of his quietest workers, he was never quite sure of her name, was already there, a small girl with quick fingers embroidering snowflakes on the pieces he had already cut. Her nimble fingers and the white and silver thread created circle after circle of snowflakes on the silk.

Mercurio heard the post arrive downstairs and went to get it. There was a big brown envelope he was not expecting.

He opened it to find a nasty message.

'We are watching you Mercurio. You think your Zebra shop is wonderful but we think your dresses are UGLY and your suits are HORRIBLE. Shut up shop now or you’ll be sorry.'

There was a picture of giant pair of scissors cutting up the outline of a person.

Mercurio was so horrified he dropped the scissors he was carrying on to the floor.

The little embroidery girl called down, “Are you OK?”

He was going to climb the stairs and tell her about the envelope when the other workers began to arrive in the shop and he told them instead.

“You must keep going!” said the workers, bravely.

For the next week Mercurio kept going. New orders for four royal weddings and five pop-star-tours came in. He was very busy. He had told the police who promised to investigate and keep watch over the shop. The Zebra shop had a policeman outside every day.

Every night Mercurio went home feeling anxious. His mum would make him a tasty supper and encourage him to eat. She told him even a little food could give a lot of energy. He sat there every night, eating bits of toast or green beans or the occasional sausage and embroidering zebras on his labels, because doing little things did help keep him calm.

A week after the threat, he went early to the workshop. The little embroiderer was at her post. Now she was embroidering wild flowers on one of the wedding dresses. He was just about to ask her to remind him of her name when they both heard a crash downstairs. Someone was breaking into the shop.

The burglar alarm in the shop began whirring and screaming. Mercurio reached for his phone to ring the police as three tall figures, dressed all in black and carrying huge scissors rushed upstairs into the workshop. Mercurio dropped the phone, still on, behind a box of threads.

The attackers threw Mercurio onto the floor. He saw the little embroidery girl hide her needles and thread in her pocket as they grabbed her too.

He reached out for the only thing he could see, a dusty packet of pins under the table, before the attackers tied their hands, put cloth bags over their heads and carried them downstairs. When Mercurio struggled, he was hit with something heavy and everything went dark.

He woke with a pounding head. He could see nothing but the fibres of the cloth bag, still over his head, which his designer’s eye noticed was of the very finest quality.

“Is anyone there?” he asked in a wobbly voice.

“Yes, there’s me,” came the answer. He felt small hands at his neck; the bag was lifted. He was looking into the face of the little sewing girl and behind her, the shadowy cavern of a huge warehouse full of rolls of cloth stacked to the ceiling.

Chapter 5 – a bumper chapter to end the story!

“They’re coming back later,” said the girl. “They don’t know I’ve got myself free and they don’t expect you to wake up for ages.”

“I saw you pick up your needle and thread and I’ve some pins,” said Mercurio. “My mum always says, little things matter. Can we do anything?” His eyes darted eagerly around. There were rolls of fabric everywhere. Was escape impossible? “I’ve an idea,” said the girl. Together they came up with a plan. They made some quick preparations, sewing and pinning as if their lives depended on it, as maybe they did. Then they heard the distant sound of voices.

“Here they come,” said the girl. They put the bags over their heads, slipped their hands into the loosened ropes and lay still.

The voices were arguing.
“Let’s ask for millions in ransom.”
“Let’s keep him a prisoner."
“If Mercurio is freed he’ll make beautiful clothes again and we’ll be ruined.”
Someone muttered about murder.

Mercurio recognised the voices: they were all designers he knew. One was someone he thought was a friend. He felt a chill to know that they hated him so much.

He heard the arranged signal: a fragment of music, a little tune, hummed in a quavering voice by the little embroiderer. It was such an unexpected sound in the middle of the warehouse filled with arguing voices that there was a surprised silence.

Mercurio called out “Now!” and Mercurio and the girl leapt up, taking the cloth bags off their heads and pulling towards themselves wide red ribbons of material, carefully positioned on the floor. In an instant a great roll of cloth gathered up under the kidnappers’ feet, like a giant bag. All three were trapped.

“Run!” called Mercurio, grabbing the girl by the hand. They ran out of the warehouse and into the sudden sunshine of a spring day. Several police cars were speeding towards them. One slowed up.

“Clever idea to leave the phone on when you dropped it,” said the police inspector, leaning from the car-window. “We heard everything and our experts identified the voices. How did you escape?”

Mercurio explained as the other policemen ran into the warehouse and found the three designers still trapped in the giant sack.

“It’s all sewn up,” said the inspector, grinning at his own joke.

Everything happened in a whirl after this. Mercurio answered what felt like a thousand questions. He saw the girl only in the distance. His mum was at the police station briefly but then she disappeared. And where was the girl? And what was her name?? And where had she gone? No one seemed to know. Wearily he went home. He thought his mum would be there.

She was. On the table was a giant pie and fresh vegetables. There too was the girl. “How did she get here?” he asked his mum.

“I asked her. As I always say,” said his mum. “Little things matter and she is pretty little ….. and rather cute.”

“What on earth is your name?” he asked.

“No need to apologise to me. Mercurio is strange.” His mother smiled.

“It’s Minima, it means small in Latin, but my friends call me Minim.”

He smiled again. The perfect name.